For our medical specialists to check if a treatment option / appointment is possible, submit your data here.

Weight loss surgery (bariatric surgery) is performed with great expertise by the extremely experienced surgeons of our Section for Minimally Invasive and Bariatric Surgery at Heidelberg Department of Surgery. There are various options available for patients desiring surgery for weight loss and to improve comorbidities, especially type 2 diabetes mellitus, in Germany:

In most cases, gastric sleeve surgery and gastric bypass are recommended. The best option for each patient is discussed individually. 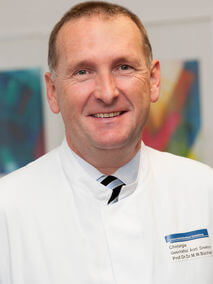 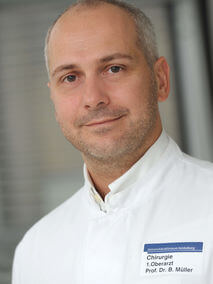 Bariatric Surgery - Why and when?

Obesity is a condition associated with many other medical problems like type 2 diabetes mellitus, high blood pressure, fatty liver, dyslipidemia, and others. Quality of life is markedly decreased. Most therapies, such as diets, do not lead to sustained weight loss. If patients have already been unsuccessful with these therapies, surgery can be a reasonable next step.

Benefits of bariatric surgery for most patients:

For patients with type 2 diabetes mellitus

In Heidelberg as well as internationally, gastric sleeve surgery and gastric bypass surgery are generally performed. Both procedures result in the same weight loss and have similar effects on diabetes and other comorbidities. Both of these operations will leave patients needing lifelong vitamin and trace element replacement.

During the gastric sleeve procedure, two thirds of the stomach is removed and with it, hormone-active cells responsible for the feeling of hunger. With the removal of these cells and the reduction of stomach size, various changes in second messengers and metabolic processes are triggered and the patient's food intake per meal is significantly reduced.  The gastric sleeve is considered a technically simple, safe and effective procedure.

During gastric bypass, the stomach is divided so that food only reaches the upper part (the vestibule), which produces a rapid satiety signal. The remaining partially-digested food then bypasses the rest of the stomach through a loop of small intestine. This re-routing triggers various changes in the second messengers and metabolic processes and the body absorbs fewer nutrients. Weight is reduced, thus also improving the comorbidities. This surgery has shown good long-term success.

If possible, these operations are performed with a minimally invasive approach.

The Duodenal switch procedure, gastric balloon (for BMI > 60) or gastric bands (gastric band - especially for adolescent patients under 18 years) are used only in special cases.

What are the risks?

Both common procedures are extremely safe in experienced hands, with complication rates under 2%.

Nevertheless as with all operations, complications can occur, such as suture leakage, bleeding, infection, allergic reactions to anesthesia, cardiovascular reactions, and more. Complications that do occur are well controlled in most cases thanks to much experience with large abdominal surgeries that are commonly performed in our center.

In the medium and long-term, there are particular problems affecting digestion such as nausea, diarrhea, constipation, low blood sugar or ulcers.

All risks are discussed in detail with each patient prior to surgery, and there's an opportunity to address all questions and concerns.

What investigations must be performed prior to surgery?

What is the process? How long is the stay in Germany?

In total, patients should plan for a stay of approximately 8 weeks:

If complications occur, the patient stay may be longer.

What are the costs of bariatric surgery?

To estimate the costs it's necessary to submit current medical records (no older than 3-6 months), also containing information about possible comorbidities.  Based on this information, individualized treatment plan and cost estimate will be created.

How can I send a request?

Please send us, via our international telemedicine portal:

The International Office will immediately forward the request to an experienced surgeon from the Obesity Center once the completed file with all information has been received. Your documents will be reviewed within a few days and we'll inform you whether we can offer the desired treatment.